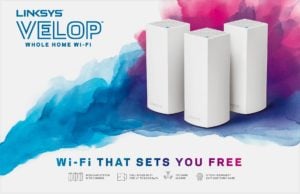 HOW DOES WI-FI MESH NETWORKING HELP?

Thank you for asking, imaginary person who can only speak in caps lock.
Wi-fi mesh networking is unique in the home networking area because it has a modular design. Which means you have the option to add or remove modules to improve the design (in this scenario, your coverage).
Say if you need more coverage in a particular area of your home, just add a module.
Overkill and too much radiation? Just remove a module.
But Linksys labels their modules as nodes, so let’s roll with that from this point onwards.

Again, thank you imaginary person whom we now know is a lady.
The numbers following AC at the back of the router model indicates what speeds they can provide. In theory.
To manage expectations, these speeds are not indicative of the speeds you will see in reality.
Linksys Velop has a AC-2200 class rating. 2.4GHz network at 400Mbps, and the 2 of the 5GHz network at 867Mbps each will give you the class rating numbers.
This will also tell you that Velop is a tri-band device.
But because of the wireless technology in place on the Velop, the second 5GHZ band is dedicated for the nodes to take advantage of and used to communicate with one another.
Essentially, home users will only have 2 bands to use, one 2.4 GHz, and the other 5 GHz.
This is also why Linksys can make the claim that their Velop will have no signal degradation as you add, move, and remove nodes.
Scroll to Top